We ate out at Zio's and while we were waiting for our food to arrive I drew this little guy from my youngest's kiddie menu.  He felt it needed some color so he helped out and added a bit of red crayon. 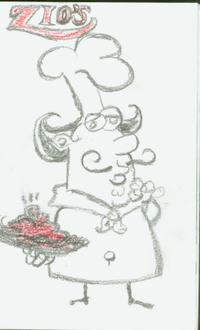 The same kiddo never goes anywhere without his 'bears'.  We bought him one tiny stuffed mascot bear on a keychain as a souvenir a few years ago.  Since then everywhere we go on trips, he gets a bear as a reminder.  He gets bears for birthdays, Christmas,  anything.  We've lost count of how many he has.  He plays with them like other kids do GI Joes or Barbies, they have their own dollhouse, cars, and accessories he has hoarded.  His brothers and sister knit or sculpt toys for his bears to play with.  When we go out he stuffs his pockets with bears.  I've caught him going out in cargo pants with over a dozen tiny bears crammed into his pockets.  He even takes along an oversized beanie bear to use as a pillow in the van! With all these bears hanging out with us, it was past time to do a stuffed bear sketch for him. 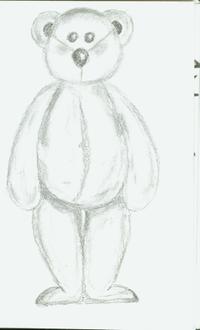