I had a fun time on the phone for what felt like hours arguing with the Dell rep.  I just got in R2’s new laptop and they had messed up on it.  He ordered a KC Royals Fan special imprint for his laptop– a KC Royals logo on a royal blue background.  His computer arrived with a lavender/purple background.  When I called Dell they said it was not a Dell error since I had ordered it online without a salesperson helping me.  (I’m still trying to figure out what that has to do with the computer being purple instead of blue.)  Who cares if the paint job is not the same as the one they show online, they say it’s my fault not their QC dept.  If I wanted it fixed, I had to pay a 15% restocking fee, the computer is over $1000 -eeek!  This after paying extra for the custom logo to begin with!!!!!  Grrrrr, I’m still frustrated! 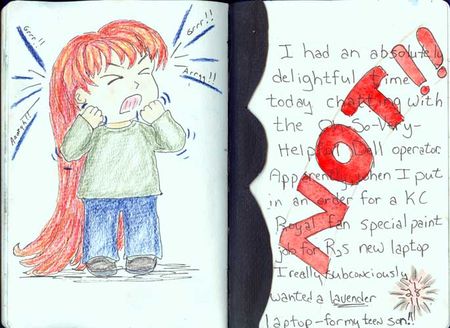