It's May and time for the Every Day in May drawathon to begin.  I just learned about Every Day in May this year and am committing myself to doing a drawing a day for the month.  Unfortunately, May is also the beginning of our busiest time of the year as a family.  We always seem to spend nearly all our time going to and from practices and games and living on fast food for the next few months.  One of the reasons I decided to join up with the Every Day in May is because I was afraid I would slack off with my drawing as normal life is suspended during the summer.  Hopefully, this will force me to keep drawing.

I chose Manga as a theme because, frankly, I didn't want to be stuck with a terribly difficult, time consuming theme.  When I was feeling sick a few weeks ago, I was still able to do a few cartoons so I think I'll be able to squeeze them in during my few free times in May.  I've also always wanted to learn to draw cartoons, especially after seeing a lot of art journalists using them as narrators for their text.  I bought a few books on cartoons and found myself intrigued with the Retro and Manga cartoon styles.  Normally, when I draw something my family just pats me on the head and says it is OK.  When I drew a little manga cartoon, my oldest son actually stopped, looked at it, and launched into a conversation about it.  Seems he was a little confused about why I was interested in drawing manga when I won't read comics.  We ended up discussing comic styles, the different types of manga, super deformed characters and chibi.  He even ran upstairs to get some of his collection to show me how the chibi can sit in the margins and comment on action happening in the main frames of the comic.  It is pretty hard as a middle-aged mom to find things that I like and that my teenage son thinks are 'cool', so I'm going to run with the manga theme for May. 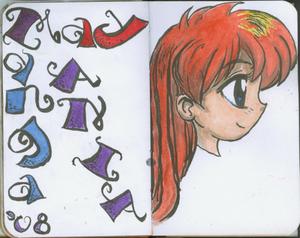 OOOPPPSS!  I almost forgot to say that as I am learning to draw this style, I will be using Christopher Hart's manga books and drawing from the tutorials in them.  That means that these are not straight from my imagination, original drawings, at least not at this stage in the process.

3 thoughts on “May Manga Mania”