I love this old park.  The island with it's rose arbor and bridge is just so unique. 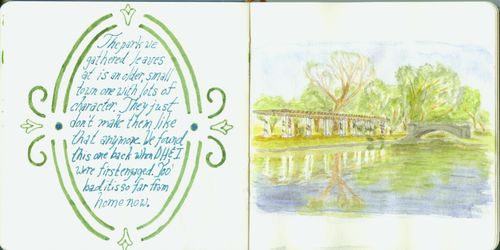 Most of the parks near us are either the little postage stamps of green with a dayglow jungle gym thrown up on them or giant sport complexes for baseball, basketball, soccer, etc.  They all have that boring cookie-cutter sameness to them. Blechh!!!Phooey!!Yuck!! (Can you tell I'm not a fan of modern urban design?)

After the pumpkin patch, we went to one of our favorite parks to gather leaves.  That was a lot of fun for the younger two, while the older pair got bored and a bit rowdy with Dad.  After we got the leaves home came the drudge work of ironing them between wax paper to help preserve them.  Master procrastinator that I am, I tried to put it off as long as posssible.  Finally fears of all the leaves being dry and crunchy forced me to the ironing board late one night.

A few scorched fingers and a roll of wax paper later and my house is full of leaves smushed between sheets of wax paper.  Now I have to go unearth the construction paper for the kiddos so they can start their art projects and I can quit waltzing around leaf piles.

It is getting closer to Halloween and that means it is time to pick out pumpkins for Jack O'lanterns!  We had a nice long drive out to the pumpkin patch.  R4 kept pointing out all the animals he saw, including the cows with pierced earrings (tags) on!  We rode a tractor-pulled hayride waaaay out to the farthest field then the hunt began.  The pumpkins were humongous.  I think the kids managed to pick the biggest of the lot. 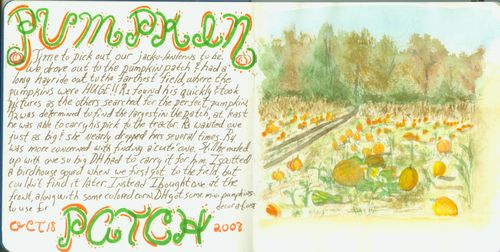 After we got the pumpkins the younger ones played in the maze and jumped on the hay bales.  We decided to go to the cider mill for apple cider donuts and sarsaparilla.  It was so crowded we were afraid R1 would get his foot stepped on in the store so we left quickly and ate in the van.

Ever since the kids were little we have had a fall leaf gathering trip to a really picturesque park with a pond, bridge, gazebo, and rose garden.  We decided we had time left to drive over to it and pick up leaves.  It was a long drive and the younger pair got bored.  Once we got to the park they perked up and ran off putting leaves in their bags.  (Later they will make them into crafts for their art class.)  The older pair, however, were more interested in playing chase and pelting their Dad with fallen gum balls.  They are getting a bit old for this now.  Bummer.

I had to take my oldest son to the podiatrist a few days ago.  He had an ingrown toenail that just refused to heal.  While we were waiting to be called I started drawing to keep from being bored to death.  A

My son ended up having surgery to fix the nail, poor guy.  He is such a stoic young man that he didn't even flinch or say a word during the surgery despite the anasthetic not having fully kicked in. (Yes, I did have a talk with him about communication and patient resposibility after I found that one out.)