I was having so much fun doing Thing-A-Day in February that Iforgot my blog's first birthday on Feb. 19th!  Actually, I'm horrible with birthdays or any date.  Thankfully, my family humors me and loves me anyway.  Maybe that's because I bribe them with CAKE!  Enjoy some cake and celebrate my blog's birthday a bit late with me!!

I was bored waiting on the kiddos to finish at the library so I started this manga and finished it at home.  I knew I couldn't do TAD without throwing in at least one manga drawing! 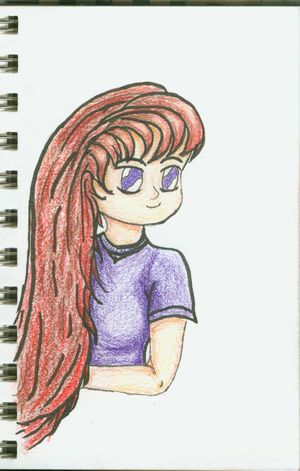 After the pumpkin patch, we went to one of our favorite parks to gather leaves.  That was a lot of fun for the younger two, while the older pair got bored and a bit rowdy with Dad.  After we got the leaves home came the drudge work of ironing them between wax paper to help preserve them.  Master procrastinator that I am, I tried to put it off as long as posssible.  Finally fears of all the leaves being dry and crunchy forced me to the ironing board late one night.

A few scorched fingers and a roll of wax paper later and my house is full of leaves smushed between sheets of wax paper.  Now I have to go unearth the construction paper for the kiddos so they can start their art projects and I can quit waltzing around leaf piles.

I had to take my oldest son to the podiatrist a few days ago.  He had an ingrown toenail that just refused to heal.  While we were waiting to be called I started drawing to keep from being bored to death.  A

My son ended up having surgery to fix the nail, poor guy.  He is such a stoic young man that he didn't even flinch or say a word during the surgery despite the anasthetic not having fully kicked in. (Yes, I did have a talk with him about communication and patient resposibility after I found that one out.)

OK, I got hooked on drawing manga figures during the Every Day in May challenge.  My twisted version was May Manga Mania, go figure.  However, it seems the mania didn't end in May.  I hate waiting in restaurants so I doodle.  Oddly,  most of the doodles end up being manga-ish.  It seems they are very comforting fun little characters to doodle and play with to pass the time.  Soooo, I thought I'd add a new category to my blog to stash these little folks away in.  Here's one from a visit to the California Pizza Kitchen a while back……….

I can't believe it, I made a travel journal for our week long trip to Florida and it ended up filling a Handbook completely!!  Of course, I pasted in tons and tons of clippings from brochures, maps, tickets, etc. collected during the trip.  I also added a few pages from my sketchbook.  To make room for them I took out the center page of each of the eight signatures in the book.  Here is a hodgepodge of pages that gives an idea of where we went and how I journal……………